The Officers and Cadets of QMGS CCF Contingent will be attending, as usual, the Mayor's Remembrance Sunday Parade in Walsall Town Centre.  The timings for this are provided on the attached notice.  Below this notice is a map of the public Car Parks that will be available on Remembrance Sunday.  Charges for these Car Parks are waived for this day.  There will be NO charge for parking in the Car Parks of Walsall.


Remembrance Sunday Instructions
Consult map provided below or on Twitter (@QMGSCCF)
Timings
Not earlier than 09.30, no later than 09.45
Arrive at Hatherton Street Car Park, Walsall.  It won’t be possible to drop off by car in Hatherton Street as the road will be closed off
Drop off or park in one of the nearby car parks and walk to Hatherton Street CP.
10.00 Move from Hatherton St. CP by to assemble in order of March (behind Sea Scouts) (directed by Parade RSM)
10.10 move to Cenotaph with main procession
10.35 arrive Cenotaph, Bradford Place (Parade RSM will direct)
10.40 Service begins
10.59 Exhortation & Last Post sounded
11.00 Two minutes silence
11.03 Laying of wreaths by Mayor and Organisations
11.15 March back past Town Hall; Mayor takes Salute
11.30 Re-assemble in Hatherton Street CP, Valedictory by HM/CO
11.35 Dispersal from Hatherton Street CP 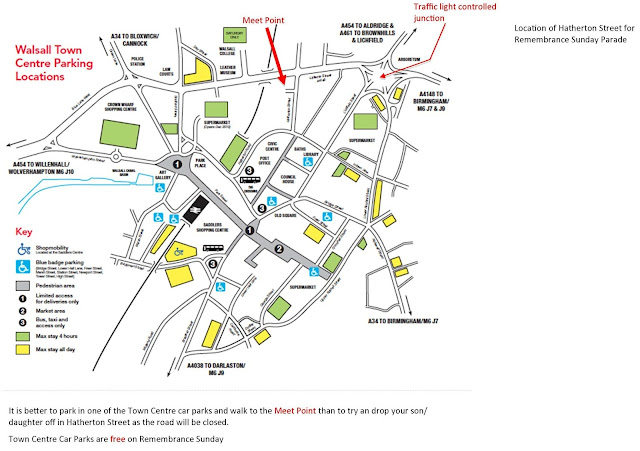